The very name “India” evokes visions of bustling cities, magnificent forts and palaces, wildlife and jungles, fascinating history and culture, and of course, that wonder of the world of architecture- the Taj Mahal!

She is also home to some incredible National Parks  that include the greatest biospheres on the Asian continent, and boast various species of deer and primates, wild peacocks, Indian Buffalo (Gaur), Asian Elephant, wild boar, mongoose, leopard, and of course the king of the jungle, the elusive Bengal Tiger.

She also has a long and fascinating Jewish heritage, and boasts historic synagogues from traditional Indian Jewish communities as well as European and Iraqi Jewish communities, some of which are  still functional!

In this unique gourmet kosher safari, we combine two of the best wildlife sanctuaries in india with some of her greatest cultural treasures, enjoying some of her most palatial hotels, and our signature cuisine and service.

We live in a wonderful world that is full of beauty, charm, and adventure. There is no end to the adventures we can have if only we seek them with our eyes open.” – Jawaharial Nehru

Our tour starts in the famous metropolis of Mumbai, India’s largest city and one of the largest in the world. Traffic in Mumbai is an experience in itself, and one day is nowhere near enough to see its many highlights, but we aim to  visit the famous “Gateway to India”, the Taj palace hotel, and the Dhobi Ghat- the world’s largest open- air laundry, where hundreds of people do laundry for hospitals, hotels, and private people around the city and deliver it back on time despite the traffic!

Mumbai is also one of  the main centres of Jewish-Indian heritage of the incredible heritage shuls of the Bnei-Israel, who trace their Jewish-Indian roots back thousands of years, to the post first-Temple period- There is even a Jewish day school (now with hardly any Jewish children ) named after the famous Sephardi Sassoon Family!

We spend Shabbat in the seaside region of the India gate, where we are able to daven with the  Indian Jewish Community, in one of its famous shuls, as well as visit the newly rebuilt Beit-Chabad, with its touching memorial to the late Rabbi and Rebbetzin Holzberg murdered on the site in the 2008 terror attacks.

Our locations also allows for numerous walks along the coastline and bustling Mumbai streets, where we might even get to see some street-cricket- All of India is cricket crazy, and there is hardly a person you will meet from businessman to porter that wont be delighted to spend hours discussing his favourite team with you and describing his own prowess at the game!

Those interested in exploring more of what Mumbai has to offer, including its famous Bollywood and cricket scene, are invited to arrive a few days early.

It might be “just a building”, but there is little that can prepare you for the “Wow factor” experienced when you walk through the gates of the outer encloser and see this famous mother of all buildings in person.

Build by a Muslim ruler as a memorial shrine to his beloved wife, the perfect architecture and sheer beauty of the design explains why the Taj Mahal is listed as one of the 7 wonders of the world.

On day 3, we fly from Mumbai to New Delhi, the Indian capital, and drive from there to Agra, the site of this incredible monument, where we spend the late afternoon exploring its various viewing points .

Sunrise photography at the Taj Mahal is said to be an experience of its own, and those who do not mind a little sleep deprivation are highly advised to rise early and get one last look at this amazing feat of human creativity.

We then set-off for Jaipur, capital of Rajasthan, land of the Maharajas.   Known as the “pink city”, Jaipur has some of the most incredible forts and palaces in the world, and we spend the late afternoon exploring and admiring some of them.

In Jaipur, one can even ride an elephant up the historic fort, watch snake-charmers in action, and try one’s hand at Indian pottery!

Even for the most experienced safari addict, there is little more exciting that seeing a tiger in the wild, and the open semi-arid terrain of Rajasthan’s Ranthambhore National Park is considered to be  the best place in the world to do so- the above picture was taking by us on our recent visit! 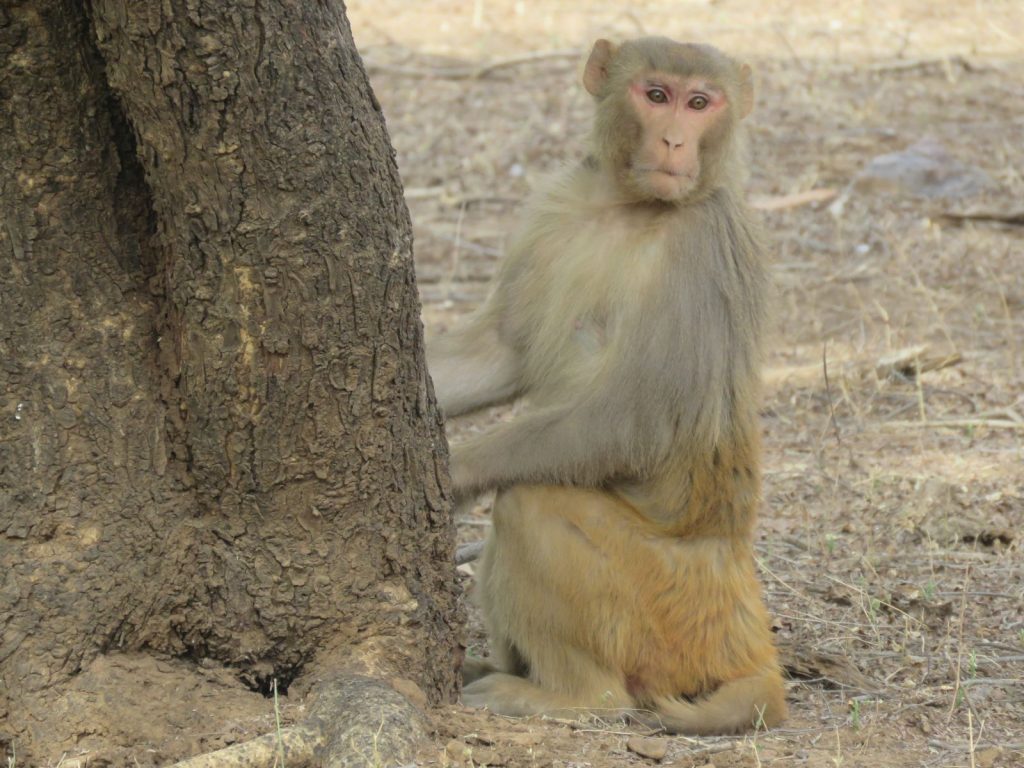 Of course, like any genuine safari venue, this is not a zoo, and nothing is guaranteed- patience is required, and also some prayers- but Ranthambhore is not just about tigers, and there are plenty other incredible animals to see and photograph, as well as just enjoying the jungle experience and views of the impressive Ranthambhore Fort, one of the oldest in India and itself a tourist highlight. 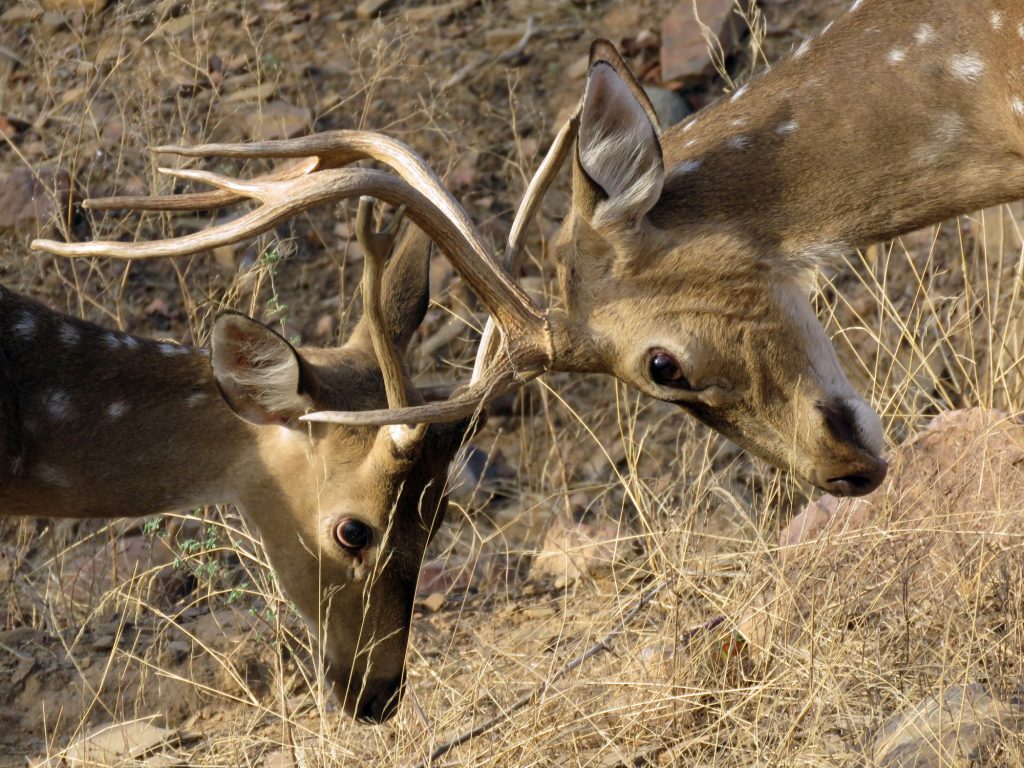 In addition to its famous tiger population, Ranthambhore is home to 4 different species of deer, including the Sambar Deer, one of the largest on Earth, marsh-crocodile, various monkeys, amazing bird-life and even the evasive  sloth-bear!  It is also a great place to spot the worlds favorite bird in the wild, something unique to India, and with any luck, we might even get to see a Peacock dance!

As is usual on safari, we spend the early morning and late afternoon hours looking for game, and the middle of the day relaxing, eating, swimming, and catching up on much-needed rest at our incredible lodge. 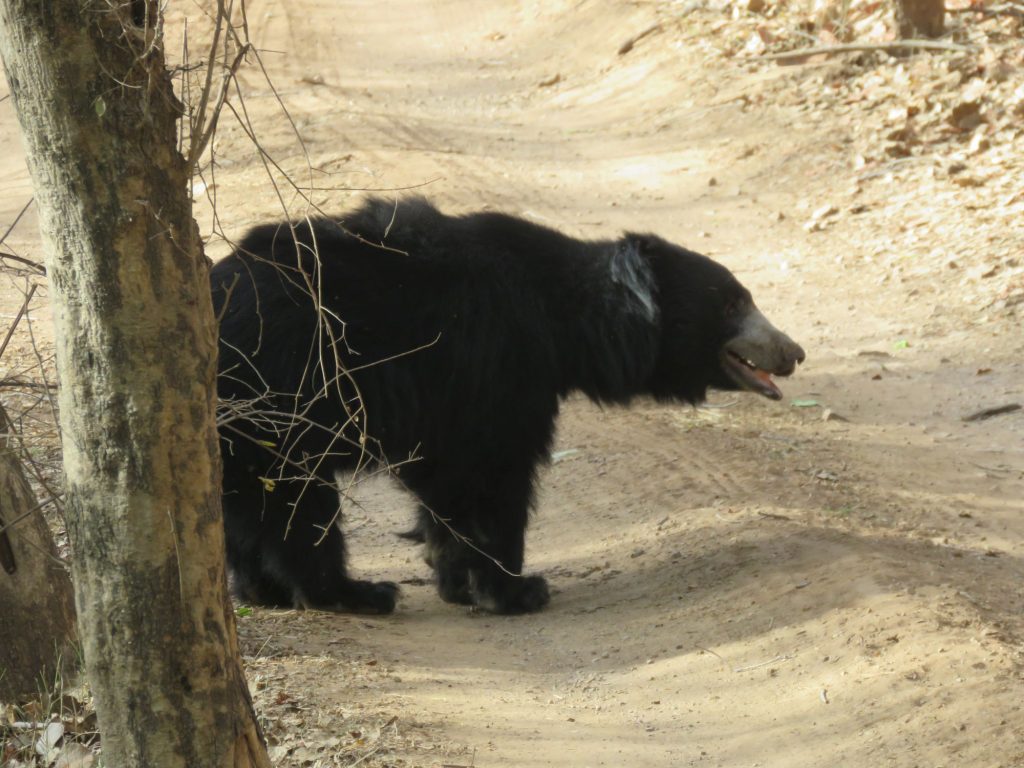 On day 7, we rise early for our final exciting safari in this incredible park- our last chance to spot a  tiger taking an early morning drink, and many of other good friends of the jungle , after which we enjoy a lavish brunch at our lodge and drive back to Jaipur, on time to fly to the far tropical South for the next exciting leg of our journey!

Known as the “Venice of the East”, the South-Western port city of Cochin (Kochi) is one of the main cities of the tropical Southern State of Kerala, the worlds Spice capital.

For thousands of years, the area has served as the centre of the spice-trade and one of the main gateways into the East, and its numerous backwaters serve as natural canals, a mainstay of transport in the region.

Today, we explore the backwaters by boat, as well as the famous port Cochin area, where the names of some of the landmarks (think “Menorah” and “Shalom”) will astound you.

Cochin is also home to one of the oldest Indian Jewish communities, almost all of whom made aliya soon after the establishment of the State of Israel, and we will visit some of its historic synagogues and hear from the locals about its proud Jewish heritage.

We spend the Weekend in “Jew-Town”, the neighborhood which, as its name implies, once served as one of the centers of Jewish life in the city, and whose heritage is proudly maintained by the current residents.

There is something indescribably both cool and surreal about spending Shabbos in what looks like a little piece of Safed in India.

Historic Shuls, shops with names such as “Sarah’s”  (whose owner is in her late nineties, may she live long, and still lives in the neighborhood) , and even the kever of the Kabbalist of Cochin, all testify to the incredible Jewish life that once prospered here.

On this memorable Shabbat, we hope to get the opportunity to make a minyan in the historic Paradesi Synagogue itself and meet some of the last remaining Jewish residents!

On day 9, we leave behind the historic legacy of Cochin, and fly inland to Bangalore, India’s fourth-largest city and its famous High-Tech capital.

Known as the Silicon Valley of India, Bangalore is the center of India’s booming technology scene.  It is also the capital of Karnataka, the “Elephant State” and an important center for, believe it or not, kosher supervision!

America’s major kashrus agencies, from the OU to the Star K all spend time in this region, and we hope to have the local Rabbi explain to us how so many of the foods we eat contain raw materials originating here!

The jewel of the Indian Jungle, the Kabini River winds its way along the border of two great National Parks, Bandapur and Navargole, and is one of the most pristine and un-spoilt areas in the country.

Boasting the greatest diversity of flora and Fauna on the entire Asian continent, it is one of the best places to see the endangered Indian elephant in the wild  (most elephant in this country are known to be of the working variety) as well as the Gaur, the feared Indian Bison, which is the world’s largest bovine species and even larger than the African Cape Buffalo and American Bison!

A long but extremely worth-while drive takes us through numerous towns and villages to this paradise, where the hustle and bustle of Indian urban sprawl and traffic give way to the tranquility and silence of the jungle!

We aim to arrive on time for our first afternoon safari in this incredible park.

Although good sightings of large herbivores are almost guaranteed, Kabini is also prime big-cat territory, and although the thicker jungle terrain makes sightings more challenging, the site of a tiger or leopard stepping out of the bush, crossing the road, and disappearing again, is truly the experience of a lifetime. 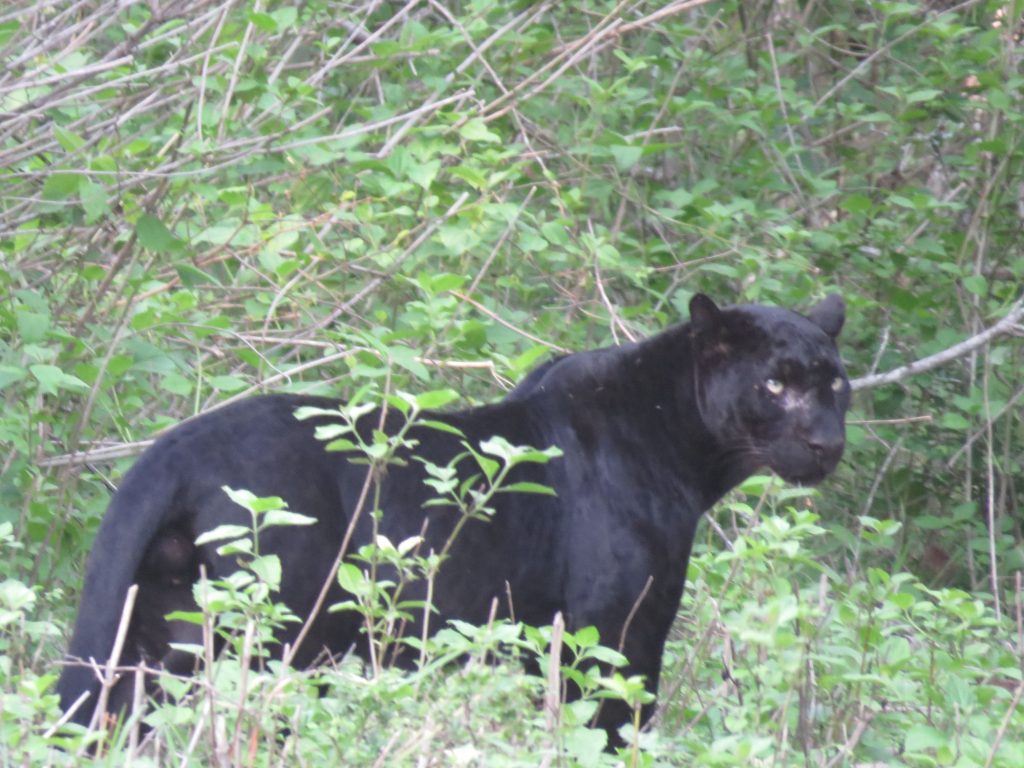 Kabini is also one of the only places in the world where one has a decent, though small, chance of sighting the incredibly rare black panther (above picture as taken by us on our recent visit!), something even the most regular safari enthusiast would travel the world to see- One who is lucky enough to get a quick  glimpse of this beauty will immediately understand why he is known as the “Phantom of the Forest.”

In addition to elephant, gaur, leopard, black panther and tiger, Kabini’s “Big 7” can also include rare Indian wild-dog and sloth-bear, and with some luck,  many other species, such as the Malabar giant squirrel, red mongoose, bonnet mccaw, and of course the dancing peacock, can also be sighted.

Kabini is truly a nature lover’s paradise, and saying goodbye involves many mixed feelings- yet good-bye we must say, and we set out for our journey back to Bangalore on-time for our international flights home. 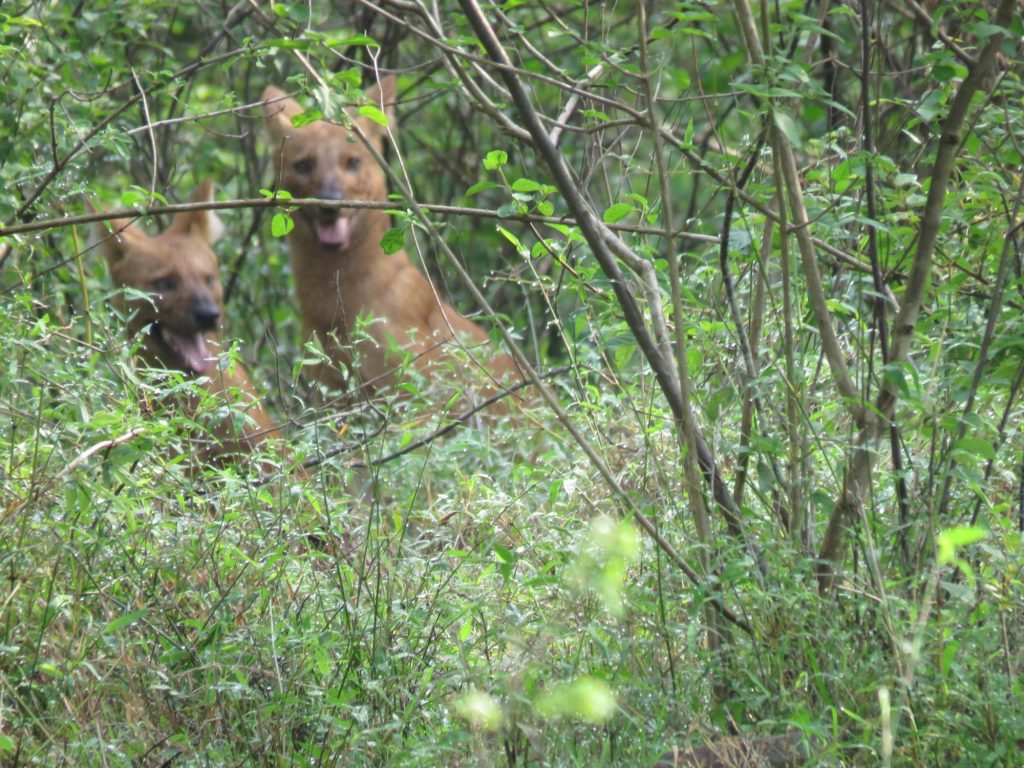 These FAQ's are specific to this tour. For general info please visit our FAQ's Page.

India’s main cities have a surprisingly good health-care industry with medical tourism being rather common, but it is essential to have the correct travel insurance and to bring any prescriptions and preventive medications with you.

The same cannot be said for more remote locations , so travelling with basic medications and first aid is always advisable, as is emergency evacuation and medical/travel insurance.

Yellow fever innoculations might be required by certain countries for re-entry , and the subtropical, tropical, and equatorial regions often have low  malaria risk, so check your itinerary carefully for guidelines.

As we eat in top hotels,procure the best quality produce, and drink only bottled water, the risk of the dreaded “Delhi Belly” is relatively low, but as stomach upsets are very common in general with travellors to India, and we do frequent public places, it is recommended to bring Cipro or other anti-biotics with under your doctors guidance, and to consider preventive shots for Typhod, Dysentry, Cholera, and the like as per your travel clinic and doctors recommendations.